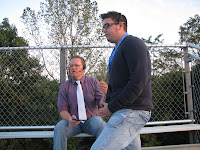 PENN LAIRD - We weren't the only ones at Spotswood for the Little Giants football game last Friday night. It was week 3 of the Augusta Free Press & Waynesboro Generals webcast of the Little Giants season and we were joined by :
http://www.newsvirginian.com/

Posted by From the Sponsors at 7:59 PM No comments: