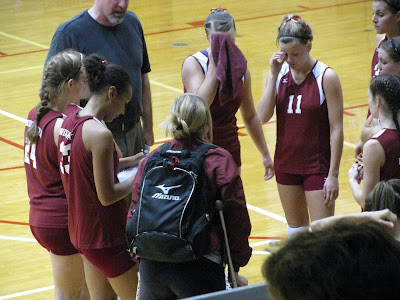 James Wood's Blair Wampler is still recovering from an injury that requires the freshman to hobble around on crutches but her team gave Roanoke all they wanted last night. 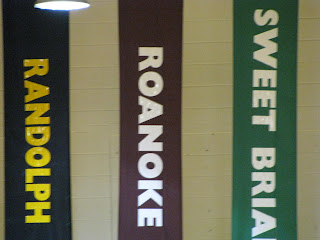 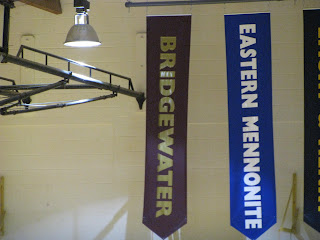 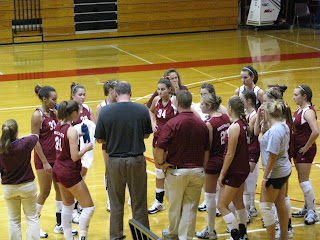 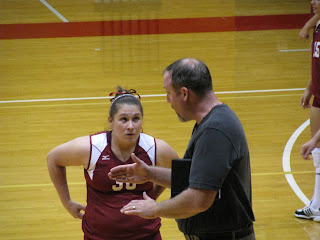 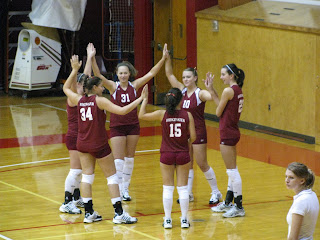 BRIDGEWATER- The teams came in to the ODAC showdown with very impressive records as Bridgewater stood at 11-2 while visiting Roanoke College came to town at 11-1. It took two full hours for the visiting Maroons to dig (Volleyball term) their way out of a 2-0 hole and defeat the Lady Eagles 3-2...

The two squads traded kills and digs for 214 points with the final tally went 108-106 for Roanoke and the largest margin of victory in any game was 25-21. Bridgewater captured the opening two games by scores of 25-22 and 25-21 and appeared on their way to collecting their 4TH straight ODAC win to start the season.

Roanoke (picked 5TH in pre-season) rallied for wins in games 3 (25-21) and 4 (25-22) but were forced to hang on at the end of game four. Bridgewater rallied for 6 straight points to pull even at 22-22 before the Maroons closed out the equalizer by running off the final 3 points.

BC rallied from down 3-1 in the fifth and final game to take a 6-3 lead but couldn't close the deal. Roanoke captured the final game 15-13 but every fan in the building at Niniger Hall was treated to some highly entertaining volleyball.

The Lady Eagles take to the road for their next match when they travel down to Ferrum for a non-conference match later this week. BC returns home on Saturday for a ODAC showdown with league favorite Washington & Lee at 11:00 AM.

Tommy (TK) Keeler of the Northern Virginia Daily led off his On Campus story this week with some notes about Strasburg's Katie Baker ('08) and Sherando's Erika Dimagl ('06) leading the way for BC. You can check out TK's notes in the Wednesday edition or at http://www.nvdaily.com/ . There was a couple of more players connected to TK's area in the gym. Rachel Hawkins (Millbrook-'08) is a freshman for Roanoke and Blair Wampler (James Wood-'08) is still nursing an injury for Head Coach Greg Spector and his Lady Eagles.

The team that Katie left back at Strasburg to defend their state title picked up another road win last night at Clarke County. The Rams swept the Eagles to open their Bull Run District campaign with a 3-0 victory. Tim Tassa was in the stands and you can read his gamer at http://www.nvdaily.com/. Strasburg (8-2, 1-0) takes to the road on Thursday night when they travel down to Madison County.

I did a little research on the Club Volleyball team down at Va. Tech where he heard that Kaitlin Smoot (Strasburg-'08) made the squad after surviving 75 fellow Hokies searching for one of 12 spots. The updated roster is not in place yet but they do show a home tourney scheduled for October 25 & 26. We will pass on any more info as it becomes available...