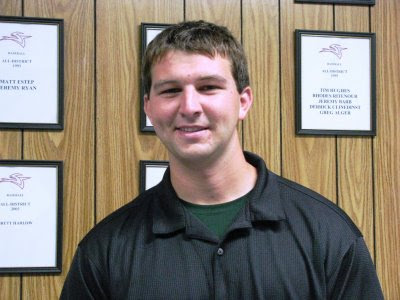 The 7:30 P.M. signing ceremony made it official as Jones inked his new contract and met a number of the people that play a big part of making New Market on of the Valley Baseball League's model organizations. The guest list included the Alger family, Vice President Jim Weissenborn , board members Dave Beaver and Jay Hafner.

Mr. & Mrs. Mo Weber (The Legend of the Valley), Katie Getz, Abigale Hansberger and the Barb family also joined in to welcome Jones into the fold as did the Carter family. Rebecca has already posted some pictures from the evening, including the Welcome message on the scoreboard that lit up the beautiful fall sky at the ballpark.

Bringing Jones into the fold to lead the Rebels next summer continues the recent trend of hiring for the New Market club. Starting with Blaine Brown back in 2004, Alger has always looked for the perfect balance between baseball knowledge and character in choosing his Field General. After Brown moved up at Maryland-College Park, Alger looked inside the extended Rebel family for 2007 Manager Evan Brannon.

Brannon was the assistant baseball coach at Randolph-Macon back in 2007, working with Head Coach Ray Hedrick. Hedrick led the Rebels from 2001 to 2003 and remains a big part of the New Market organization. This will be the second time that the assistant coach for Hedrick's Yellow Jackets will be leading the way for the Rebels.

Brannon was unable to return for the 2008 season after accepting a position with the Tampa Bay Rays organization. Evan is the area scouting supervisor with the Rays down in the Tampa-St.Pete area but Alger didn't have to look far to find Nolan Neiman for the 2008 campaign.

Neiman was on the staff with Brown back in 2006 with the Rebels ran away from the VBL during the regular season. Bringing Nolan back to lead the Rebels last season was a natural move for Alger and company. A up and coming baseball mind that understands the Rebel way of conducting business both on and off the field. Neiman made the move from D-III DeSales University up to D-I FGCU and that promotion opened the door for Jones to take over the Rebels for 2009.

Jones spent the summer of 2007 working in the Valley Baseball League as a member of the coaching staff of the Winchester Royals. Spending a season as the assistant coach for skipper John Lowery offered Jones another opportunity to absorb baseball knowledge from one of the most respected team leaders in the VBL.

Now that Jones has been introduced to the New Market family, he will team up with Alger to search out the remainder of players needed to fill out the Rebel roster for next summer.

"We will be looking at a number of things as we search out our ball players," Jones said. "We want to know how they are as people and beyond everything else, their ability to listen. It is about more than talent, it is about buying into our overall goals."

I will have plenty more about Jones in a seperate press release but first I wanted to retrace the steps that brought this amazing young man to the Community of New Market.

Lucas- Welcome to the Family !