A Look inside the baseball journey for Mr. Lucas Jones 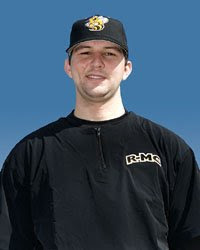 NEW MARKET - It is time to mix in some numbers for the more serious media outlets that will report on the new skipper of the New Market Rebels. As I mentioned to Lucas last night during our conversation, I tend to want to focus on the journey but I do know that there are people who are just in need of the facts so let us take a look at the path of Jones.
Photo is curtosey of Randolph-Macon College.
__________________________________________

The word that came up more than once during our talk was Passionate and the formula used by Lou Holtz (Trust, Love and Commitment)...

Once again it would appear that Bruce Alger has landed a rising star in the baseball world to come to the town of New Market in hopes of having his Rebels return to the top of the VBL- both on and off the diamond.

Bruce - Thanks for the invite
Lucas- Thanks for your time
Best of Luck to Both of You!
Note : If there is anyone out there who would like more info on the hiring - Please let me know.

From the Sponsors said…
He is an pretty special young man. Maybe it is something in the water down there!
October 15, 2008 at 5:03 AM