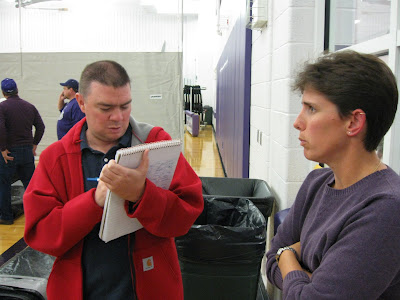 At first thought this wasn't really big news to those in the Volleyball circle but when you stop and take a closer look...

Yes - the Rams did go 28-0 last year and claim the Class A State Championship last year. But sometimes people forget that this is High School, not the University of Texas football program. When Vince Young left Austin following his Rose Bowl victory, Mack Brown had his choice of ANY High School Quarterback in the country to come in and run his offense. There is a big difference between replacing College athletes and re-tooling your Class A Volleyball roster.

Katie Baker and Kaitlin Smoot are now playing their VB in college and five other Seniors left on Graduation Day last summer. Lyndsey Funkhouser, Cassidy Weitman, Kayln Warner, Britanee Hodson and Jo Owens all played a major roll in the Strasburg run last season. Seven seniors that would have to be replaced.

There was little doubt that the Rams would be competitive this season. Bethany Doman, Stephanie Conde and Jenna Smoot were returning as well as Rebecca Coffman and Shanna Devers. Five returning players out of 14, competitive for sure but Lights Out, don't think so.

Three years of hanging out with Suzanne has allowed me to understand a few things about just how much Coach cares about her players. All season during the run last year Coach wouldn't let her girls look past the next match. Interview after interview, the message was clear- one night at a time, one game at a time. The formula worked and 28-0 will stand the test of time.

Strasburg opened this season at 2-2 after falling to Class AA Sherando and Musselman (West Virginia). Coach didn't flinch, let alone panic as her message to the team was clear. You have to learn to trust each other on and off the floor and when you do, good things will happen.

The train began to pick up steam and the difference was very noticeable. Between Match #3 (3-1 win @ Page) and Match #6 (3-1 win @ Stonewall Jackson) was the first time I noticed the difference in the young team. The night at Page County showcased a team in search of confidence, especially after losing one game. Strasburg rebounded to win but there was some UN-easy moments.

12 nights later a different Ram team took the court at Stonewall Jackson. The match stood at 2-1 and the home team was mounting a rally but this time Strasburg had a different response. There was laughter coming from the Ram side of the net as they started Game 4. Not a disrespectful laughter but a we are going to be O.K laughter and they haven't looked back since.

The victory that night improved the Ram mark to 4-2 and it created a two game winning streak that now has reached 19 straight. Thursday night will have Strasburg heading South as they will travel to either Altavista or Randolph-Henry (Charlotte Court House) for their Regional B Semi-Final.

One more victory will earn Strasburg a second straight trip to the State Tournament. A defeat will end the remarkable season and it will all take place 3+ hours away from 250 Ram Drive.

They are their own team, with their own accomplishments. Junior Jacyln Ayers went from the JV squad to earning the Bull Run District Player of the Year, Conde is pounding the ball, Jenna Smoot has taken her game to another level and Doman has stepped into a leadership roll, all of these improvements have come under the guidance of the Strasburg coaching staff, assistant Jennifer Mason and Head Coach Suzanne Mathias.

Anonymous said…
Great story dad! So glad to hear the ladies are doing so well. We ARE Strasburg!
November 4, 2008 at 7:06 PM