Inside the VBL : Greg and Cathy Brill (Front Royal) 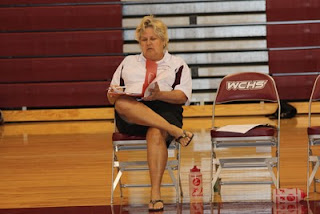 After watching Cathy's current Wildcats Volleyball squad face off with the Panthers of Rappahannock County Thursday night I went in search of a story. Not your typical gamer but a story about a couple that appears to find ways to be a part of the community up in Front Royal year around. I should mention that Warren County dropped their match 3-0 (25-8, 25-17 & 25-16) to a talented Rapp team but as Paul Harvey says- "The rest of the Story" will be about Greg and Cathy Brill.
Cathy Brill moved to our Valley 15 years ago from Texas and she is currently in her ninth season as the Volleyball Coach of the Warren County Wildcats. Her program is still recovering from the recent creation of WCHS's sister school Skyline. The new school opened its doors last year and a number of the programs at both schools are still going thru re-growing pains if you will. Brill has coached a total of 11 players that have gone on to play college volleyball.
The high water mark for the program came back in 2003 when Brill's Wildcats captured their first regular season Northwest District title on its way to a 19 win season. Her days at WCHS haven't always been as Coach Brill though. Cathy married local Sportswriter Greg Brill back in 2004. Brill has been a fixture for a number of years in the Valley and their paths first crossed when Greg was covering a WCHS volleyball match for the Winchester Star.
"I remember the day when Greg spent about 40 minutes trying to cheer me up," Cathy said. "We had just lost a match at the Apple tourney and I was upset because it was a match we should of won. I think it was against Handley but Greg would know for sure," Cathy added.
Their paths would cross again later that season at Millbrook where Cathy was scouting a match that Greg was covering and one thing led to another for the couple. Fast forward to their first date on Halloween night a little later and you have the makings of a real life Love Story. This season Greg's roll with the Front Royal Cardinals grew and he also made the switch from PA announcer over to the Cards Web cast.
It was back in 2006-2007 that I first covered a VB match in the Valley and it was Mrs. Cathy Brill that was the first HS coach I interviewed for the Northern Virginia Daily. Until that night I had just been covering the VBL for the NVD and I was thankful to speak to a coach that was so accessible to me. Greg and Cathy Brill give a great deal of their time to the community of Front Royal and Warren County and for this I tip my cap!
Greg wasn't there last night as he was off writing a gamer for the Winchester Star but I told Cathy to let Greg know that if there is more to the story that he should catch up with me and fill in the blanks. You can check out Greg's work tonight at http://www.winchesterstar.com/ .
Best of luck to the Wildcats the remainder of the 2008-2009 season!

Thanks for the kind words!

Cathy and I will celebrate our third wedding anniversary on October 8. Our first date, was, indeed, October 31, 2004.

Texas gals are the best!