The telling of a special story : Harrisonburg's Veterans Memorial Stadium 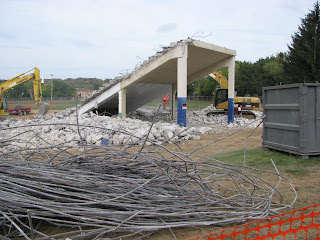 HARRISONBURG-This past week was a special one for the folks in and around H-Burg as the final bricks fell to the park known as Veterans Memorial Stadium. The demolition of the historical park began on Monday September 22ND and continued until Friday morning (9/26).

There are so many people that have a story to tell about how their lives that have been touched by experiences both on and off the field. As a relative new comer to our beautiful Valley I am not sure that I am the most qualified person to try and tell the story of what this park has meant to so many people but it is a story that deserves to be told.

Veterans Memorial Stadium was dedicated back in 1948 as a tribute to the 139 area Veterans that lost their lives in World War II. A plaque with the names of those Veterans had stood outside the stadium until recently when the plaque was moved to a secure facility.The plaque, with the addition of three names left off the original, will be integrated into the design of the new facility.

James Madison University is the new caretaker for the old Harrisonburg High School and the land that was the site of the original Veterans Stadium. The plans for the OLD site are to build a New Veterans Memorial Stadium. The new plans include building a baseball stadium as well as a softball stadium for the Dukes athletic teams. The VBL's Harrisonburg Turks will be among those calling the new park home.

I spent a fair amount of time over at the Vet last week but I can safely say I finished second to Mrs. Teresa Wease in the category of hours logged during the demolition. The reason the falling of the stadium took the better part of five days was JMU's plan to recycle the concrete for lack of a better way of painting the picture. Most observers showing up on Monday came expecting a big kaboom and then one fell dropping of the old ball park but those of us that stayed until the end of the week understood the reasoning.

The plan of taking the cement and crushing it for the purpose of re-using it in the New Veterans Memorial Stadium is priceless. The Turks will play their 2009 VBL Season at the current JMU baseball stadium but there is one obstacle for Bob & Teresa Wease. The park that JMU plays in now does not have lights so the 2009 season will consist of 22 day games for the Turks.

2010 will be a landmark year for the city of Harrisonburg, James Madison University and the Harrisonburg Turks but the remainder of 2008 and then 2009 will be on for both reflecting on the past and hanging on until the future.

Saturday July 26TH,2008 was the date of the final regular season game in the history of the Vet. it is the day I will remember for years to come. Bob & Teresa Wease team were hosting the New Market Rebels and we were there to celebrate with 18 wonderful Turks Loopsters. 18 Turks fans had completed the Around The Valley in 60 Days Loop and Teresa had a special night planned for her group of fans.

The ceremony before the start of the game was one to remember as Turks PA announcer Curt Dudley read a prepared statement about the history of the stadium and then all 18 Turks Loopsters (including Teresa and son Matt) were honored as well. The final surprise of the evening came when I was given the honor of throwing out the FINAL planned first pitch in the glorious history of the Vet.

I was proud to stand with my foot on the famed rubber when I threw the first pitch in the direction of home plate. Dudley was kind when he was calling the pitch but I have to say it did cross the plate...

New Market won the game that night by a final score of 3-1 to keep their faint playoff hopes alive for another day. The Turks traveled up I-81 up to New Market the following day and eliminated the Rebels by defeating the home team 8-3. With the victory the Vet was guaranteed at least one more playoff game!

It was fitting that it was Bruce Alger of New Market that was the opponent for the final home game at the stadium. Bruce is one of the people I mentioned above that could fill pages of stories that I would love to read as his days with the Vet goes back four decades. Sorry to age you there, Mr. Alger.

Fast forward to July 29TH and there was one more game for the Turks faithful. The Turks had pulled off quite the upset the night before at Bulldog Field in Luray when they defeated the #2 seed by a final score of 7-2. Not only were the Turks coming home but they were coming home ahead in the best 2 of 3.

The final game at the Stadium did not go the way the Turks and their fans would of hoped for as the Wranglers defeated the home team by a final score of 8-1. The season ended the following night back in Luray when the eventual VBL Champions defeated the Turks 4-3 with a run in the bottom of the ninth inning.

July 29TH until September 22ND was an UN-easy time for the Wease's and their fans as their days with the Vet were numbered. There will be a share of fans that will say that it is for the better as the new Vet will be better and full of bells and whistles. This may be true but it hard to let go of 50+ years of priceless memories. Bob Wease can take you all the way back to the 1950's with his stories of the Old Vet.

Our good friend John Leonard over at http://allthingsvalleyleague.typepad.com/ shared one of his memories with me about his playing days. John played his college baseball at what was then Eastern Mennonite College (modern day EMU) and was telling me about a day/night double header back in 1992 or 1993. Under the lights at the stadium John played right field that night a few years ago...

Bruce Alger, Bob Wease , John Leonard or even yours truly for a remember able night will have stories to tell as I am positive many more do! Thanks for the Memories and for all the fallen that you stood for...

Anonymous said…
It's always sad to see an old fond stadium come down like that.

By the way, if anybody out there might know where I could get the Harrisonburg Turks team baseball card set from 2006, please contact me at kb@baseballyakker.com. I am specifically looking for the card of Robert Taylor.

From the Sponsors said…
The cards are done each year by Bob and Teresa's son Matt. Teresa should be able to help you/us with that. Thanks for the note...
September 30, 2008 at 5:32 PM

Anonymous said…
Actually, I've tried emailing them at turksbaseball@hotmail.com, but I haven't gotten a response.

Anonymous said…
Actually, I've tried emailing them at turksbaseball@hotmail.com, but I haven't gotten a response.