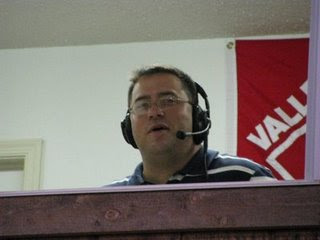 STAUNTON - R.E Lee (6-1, 2-0) is back at home for the final time during the regular season and the Fighting Leeman will be looking to raise their Southern Valley District record to 3-0 when they face the Cougars of Stuarts Draft(3-4,1-0). The kick off is set for 7:30 PM at Gypsy Hill Park with Chip Crabill (see picture) and myself set to begin the U.S Army sponsored tail gate show at 6:30 on ESPN-1240.

The game this week will be #8 in the series (2008 Augusta County High School Game of the Week) and should prove to be an exciting one. Dae' Quan Scott is as fun to watch play as anyone I have ever seen at this level. Scott has taken the ball to the End Zone 27 times in just 7 games and you have to factor in that the Senior is not around to play the end of some of the contests due to the margin of victory.

You hear the folks on ESPN and Fox Sports talk about being able to take it to the House every time they touch the ball- that is exactly the type of player that Scott is for the Leeman.

We will be in Staunton tonight but our game is just one of many being played across our Valley. Some of the other games include:

Further to the North End of our Valley:

Looking for something exciting to do on a Friday Night? There is a High School Football Game being played somewhere near you...