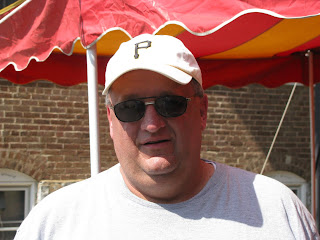 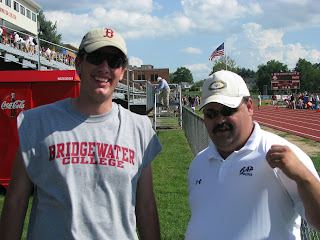 The TV broadcast crew is at the same game as us for the third straight week so the first folks we see are Dave Norman (Harrisonburg Turks) and Skipper Mike Bocock (Luray Wranglers). The next pair we bump into to are Kay & Boyd Snyder (Staunton Braves owners) but things are just starting to warm up.

The game was very hyped as two big time area football players were going to be on center stage. Dae' Quan Scott (R.E. Lee) has not picked a college yet but Alex Owah (H-Burg) has already signed to play next year for Al Groh at the University of Virginia. The two star players had a large number of press/media types running around with cameras and microphones all night long.

I want to start out by focusing my attention on one of the camera men (focus/camera...). Gene Davis was working the sidelines all game long with a number of other folks. What makes Mr. Gene Davis stand out to us?

His full name is Roy E. (Gene) Davis, Junior and his official title is Certified Public Accountant (CPA). We know him as Gene and as a big part of the Staunton Braves organization. Gene works with Kay & Boyd at the Braves home games, playing the part of PA announcer. Gene also takes the time every so often to send us a story about his memories of Valley Baseball League days gone by.

CPA, PA, story teller and now a camera bug as well? Gene has a sight where you can go and take a look at his photos. Click over to www.flickr.com\photos\leemen and take a look see at Gene's work.

What exactly had a busy, busy man like Gene at Gypsy Hill Park on Friday night? A quick look at the Leeman roster and you will spot #78- sophomore Taylor Davis. Taylor is one of the starting offensive lineman that create the gaps that allow Dae' Quan Scott to get his motor running. Taylor is also listed as a defensive lineman for Coach Dave Tibbs.

The Father/Son story doesn't end with Gene taking pictures of his son. Taylor started his Staunton Braves career back in 2002 as a Bat Boy and today serves as Bat Boy and Equipment Manager. This pair shares their love of baseball and football in ways most could only hope for. I didn't get a chance to catch up with Gene and Taylor after the game because of our post game show but my luck would change the next day.

Fast forward to Saturday afternoon at Bridgewater College where the Eagles were hosting Shenandoah University. I bumped in to Gene near the front gate. I asked Gene how he was connected to BC and that is when he told me that he was an alum of the school. Gene and his group tailgate in the same spot for each of the Eagles home games.

Near the end of the game I was able to visit with Taylor for a few minutes as I found him talking to "Buck" Harman. His Leeman are now 4-0 and the future looks bright for both his team and his career. This young man is built and could pass for a college sophomore just as easy as a high school sophomore.

Just two more examples of how VBL folks are just part of the community that for a few months of the year step up to help run our league!