VBL Update : We need Lawrence "Big Picture" Nesslerodt to stay in the mix 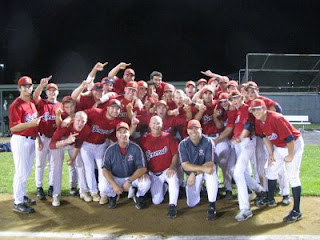 Lawrence and his Generals just after winning the South!
Photo: From Around The Valley in 60 Days
__________________________________
Life is moving kinda fast these days for Lawrence Nesselrodt as the Skipper of the Waynesboro Generals has just recently gotten married and made a career move. Lawrence has moved from being an assistant Coach at West Virginia State over to the top spot at West Virginia Tech.
In a league that is full of special people, I would argue that Lawrence is the VBL "MVP" for all of the things he does for the Waynesboro Generals and the community of Waynesboro. "Big Picture" is the face of the Generals and I for one hope when the dust settles that he will return to Augusta County for the Summer of 2009.
You could ask any number of people that are closer to the Generals than me about just what Nesselrodt brings to the table in his role with the team. A good place to start would be with some of the former Generals that have played under the Skipper in the past few seasons. I recently was able to sit down with Generals assistant Derek McDaniel and talk with him about how much Nesselrodt means to the community.

Anonymous said…
Great story Jerry and I am hoping that Coach Nesselrodt will come back, the Generals Superfans will agree with that and all of the diehard Generals fans that has came for a long time agrees. He has helped bring back the Generals the past 3 years and I know if he can come back I know he will bring up how the diehard fans are in Waynesboro and plus how the Valley League is in general. Its a great place to be in and a great league too.

Please come back Coach Lawrence "Big Picture" Nesselrodt.
As Superfan Chuck Harris would say to all the players "Do it for the Chuckster"

Anonymous said…
I cast my vote for Lawrence to come back for the 2009 season. Even though he beats us all the time, the Turks admire and respect Lawrence for the amazing job that he's done in Waynesboro for the last couple of years. He's a first class coach and an asset to the Valley Baseball League!
September 16, 2008 at 9:31 AM