SAN DIEGO- The beginning of the end started for the 2008 Padres when the decision to not re-sign Mike Cameron or Milton Bradley to help the offense. The team instead banked on Jim Edmonds to pick up the offensive slack but he was never healthy before leaving town. The second thing that happened to the Friars was an arm injury to staff Ace and last seasons Cy Young winner Jake Peavy.

Peavy has returned to the rotation and this afternoon the righty quickly became locked into a pitchers duel with the Brewers Ben Sheets. The two starters made quick work of the opposing batters in the first six innings, allowing a TOTAL of three hits between them. Peavy (9-8) fanned 8 Brewers over the seven innings he worked but did allow one run to score in his final inning of work. Milwaukee collected their third and fourth hit of the afternoon with the RBI going to the above mentioned Cameron.

In the past Cameron collecting RBI's during a Peavy start would be a good thing but not anymore. Peavy walked off the mound after 116 pitches of dominating baseball where he allowed 4 singles and 1 earned run. The Friars offense had been limited even more by Sheets as having C.C Sabathia in his rotation seems to agree with the former staff ace. Milwaukee entered the contest having captured the first two games of the series as part of their recent 8 game winning streak.

Sheets (11-6) had limited the home team to just 4 base runners through 6 innings on 1 hit, 2 walks and one error. Sheets was now pitching with a 1-0 lead but one of our favorite Valley Baseball League Alum was due to lead off the bottom of the seventh. 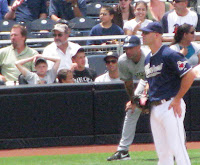 Kevin Kouzmanoff (Winchester 2002/ Nevada) led off the frame with a solid single and he would come around to score as the Padres offense followed his lead. Chase Headley sent a double down the right field line to give San Diego the tying and lead runs in scoring position. Tadahito Iguchi chased Kouz home with a single to left center that took Headley to third base.

Laynce Nix (2008 Brewers debut) made a full extension diving grab on a soft liner hit to left center by pinch hitter Brian Myrow but Headley raced home to give San Diego a 2-1 lead. Peavy was scheduled to hit next and skipper Bud Black was looking for some insurance. Peavy left for the

day and Blacks strategy worked as his team plated a third run in the inning when Jody Gerut drove in Iguchi with a RBI single.

The added run would later prove to be much needed as Cameron crushed a home run to left field in the ninth inning off All-Time Saves leader Trevor Hoffman. Hoffman settled down to retire the Brewers in the ninth to record his 26TH save on the season. Cameron finished the contest 2 of 4 with 2 RBI's and 1 run scored off Peavy and Hoffman. The decesion not to re-sign Cameron was a costly one but at least for this afternoon, it didn't cost the Friars a much needed "W".

NOTES- It would appear that Kouz has made himself a home in San Diego after coming over from the American League. The fans come to life every time the third baseman comes to the plate or anytime his name is mentioned. It has to be cool to here 30,000+ belt out your name as KOOOOOOOOOZZZZZZZZZZZZZ...

Greg's older brother Mike Maddux was working with Sheets during his entire pre-game routine. Mike is finishing his fifth season as the Brewers pitching coach after a 15 year career in the Bigs. Mike started 48 games 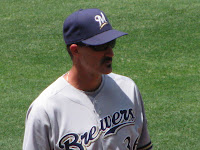 and came in from the pen on 424 occasions during his playing days with Phili, LA (2), San Diego, NY Mets, Pittsburg, Boston, Seattle, Montreal and finally Houston.

Mike went straight into coaching following his retirement in 2000 with the Astros. He went to Double A Round Rock before the end of the 2000 campaign and remained there until joining the Brewers.