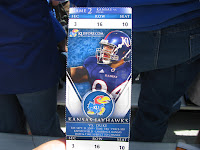 Game Ticket for JayHawk football. Memorial Stadium from the outside view. The KU Cheerleaders hard at work. The view of the Missouri River from the Airplane. Duke's Renfree looking to escape his own goal line. Both of Duke's QB saw pleanty of action during the game. Lewis finished 16 of 27 for 181 yards but 3 sacks and 2 interceptions, including one pick six. The Kansas QB put on a show for the home fans. Reesing finished with 334 passing yards/3 TD's/0 Sacks/50 rushing yards. Very Impressive Show put on by the young man. Walk, Chalk, Jayhawk Jayhawk fans doing the Wheat Wave after a score. Next up for Duke - Home vs. North Carolina Central 7:00 P.M. 09/26
Post a Comment
Read more 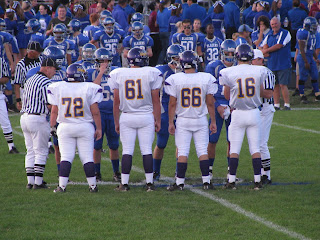 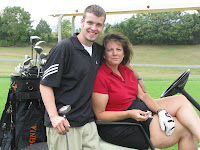 Mr. John Leonard of the ATVL - One Class Act !

September 16, 2009
One of the highlights of my summer was the opportunity to have John Leonard and his family be involved with our baseball team down in Waynesboro . John was there when we started the project and while he won't be returning for year two he will always be a big part of our organization/family. The amount of Class that John displays was ever so apparent in his posting on his site last month where he explained his reasons for not returning. The story below was written by a man that I feel fortunate to call a Friend. August 21, 2009 Some News My self-imposed hiatus is over, so let's get to the off season , shall we? First of all, I've spent some time over the past couple days preparing my top lists of hitters, starters, and relievers, and I will begin those lists soon. First, though, we have some news we have to get out of the way: I have left the ownership group of the Waynesboro Generals. The first question that is asked in these situations is why? Let me be very, ve
Post a Comment
Read more

News from the old Home Town - Ichiro makes it 9 Straight!

More from West Point - Football Side of Duke Vs. Army 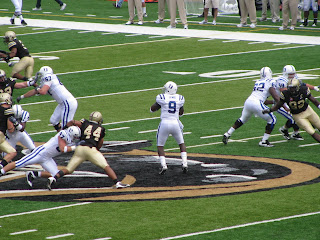 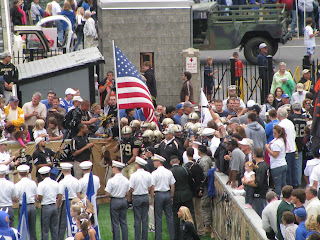