May 31, 2008
The good news for Luray fans (besides bringing home the Region B trophy on the team bus) is that their next game will be a home game on Tuesday. The bad news for the town is there is a 7:30 p.m. Valley Baseball League match-up between Woodstock and Luray . I am not sure how this one will get worked out by here is my .50 cents worth of free advice- Why not schedule the coolest double header in the history of the town?! I will try and find out what the game plan will be. As hard as the Wranglers GM (Diane Buckley) has been working I am sure she won't even blink at the outcome. Map quest has the bus ride at 3 hours - 9 minutes / 147 miles for the Red Devils.... We will try to come up with a scouting report for Lancaster as info presents itself. Here is what we do know now- Essex defeated them 8-2 yesterday and they will be home to host Strasburg on Tuesday.
1 comment
Read more

Now you know the rest of the story! Luray wins 12-7

May 30, 2008
I've always said you can judge the importance of a ball game by the number of media outlets there to cover the action! I had mentioned Craig Juer ( NVD ) and Bill Meade ( PN &C) but that was just the tip of the ice burg . Greg Brill was there to represent the Winchester Star, John Galle covering the Rams for the Shenandoah Valley Herald and Ace camera lady Rebecca Carter was snapping pictures for Around The Valley in 60 Days. I had the best seat in the house for two reasons- (1st) I was sitting next to Mr. Craig Orndorff and he's as good with play-by-play as anyone around. (2nd) The broadcast booth/table is only about 10 feet removed from home plate! The crowd was every bit as big as I had expected. Strasburg AD Matt Hiserman estimated the gathering at 700-750 with a fair amount of Luray maroon mixed in with the home team purple. Luray (25-1) sent Ryan Carroll to the mound which sent me in search of Mr.Carroll to ask him when the last time Ryan pitched. Th
2 comments
Read more 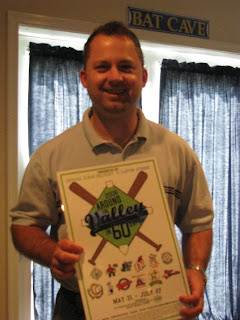 Luray captured the title, defeating the Strasburg Rams 12-7 tonight at Strasburg! Go 'dogs! Some random pictures. Story to come! Some more game pictures to be posted later :) Dan with the Around the Valley poster. Epic brain trust. Stretching, stretching... and he's out ! What an awesome slide! The amazing hit just blew the signs away... or was it the outfielder's body crashing into them? Way to go! Safe at first! Way to stay on your toes... Right after the home run. Epic. The scoreboard after the home run. Beautiful. ...is he going to be out? From the looks of it, he might be. Nope! Safe! Trying to pick us off first, again. Safe! Some base hit love on first. Some more base hit love. One epic rally shown on the scoreboard. Way to go, 'dogs! Right after the game. Post-game meeting. The Dream Team. Bill Meade hard at work. Pimp that trophy. Champs! Dad and Craig - broadcasters for the game.
3 comments
Read more

May 30, 2008
The first pitch is scheduled for 7:00 p.m. at what should be a packed house in Strasburg . The championship of Region B baseball as well as the right to stay at home for your next game is on the line tonight! Strasburg (21-2) earned a spot in the championship game after a pair of come from behind wins over Wilson (5-4) and Appomattox (7-4). Both the wins came at home for the defending Class A State Champs. Luray (23-1) arrives in town after a pair of late game victories over George Mason (3-2) and Chatham (7-6). The Bulldog victory over the Cavilers saw LHS rally back from down 6-3 late in the game. The game will see plenty of media coverage from both sides, starting with Craig Juer ( NVD ) and Bill Meade (Page News). You can read Craig on line after 10:00 a.m. tomorrow at www.nvdaily.com . I will have the special treat of providing color along side one of the best play by play man in the region. Craig Orndorff will be calling the game for his network www.valle
Post a Comment
Read more

May 30, 2008
Skipper Jim Critzer and his Waynesboro Little Giants (22-5) defeated Jefferson Forrest Thursday evening by a score of 10-8. The victory moves WHS back into state competition for a second consecutive season. The Little Giants received a first round bye, then rallied late to defeat William Byrd before heading down to Amherst to face the JF Cavilers. The Cavs (18-5) struggled in the field for a second straight game and simply could not overcome 7 errors. I don't want to spoil the read of Al Samuels coverage at www.newsleader.com or in the News Leader tomorrow. I am sure he will talk about a running catch and a 2-run homer! Way to go Waynesboro ! A number of Valley baseball teams went in search of an exhibition game to break in the troops. Both Staunton (vs. RCBL's Stuarts Draft) and Winchester (vs. Hagerstown Mud Cats) played at their home parks while Luray made a 44 mile drive out to Clover Hill ( RCBL ) to face the Bucks. Coach Bocock talked lat
Post a Comment
Read more

May 29, 2008
10. For the third night in a row I watched a great high school baseball game that was decided by one run after the home team rallied. 9. Talking with Luray manger Mike Bocock about anything having to do with baseball. His baseball smile is as wide as Critzer's . 8. Getting to spend any 15 minutes with Mr. & Mrs. Alger while they are working their magic @ Rebel Park. 7. Getting to ask both Ryan Carroll and his father which one of them was more excited when Ryan caught the final out in the Luray victory (Mr.Carroll said his chair broke from the tension). Ryan said- "It just ended up falling into my glove but I knew Jeremy was behind me" 6. Trading stories with my New Market broadcast partners and getting to tell Dallas's wife she looks younger every time I see her. 5. Getting to spend 5 hours with my youngest daughter and having her talk about how exciting the Bulldog game was. 4. Visiting with Chatham baseball parents including the mother of Andrew Redd
2 comments
Read more

An exciting night of action on US-211! LHS, Wranglers, PCHS, Rebels all see action 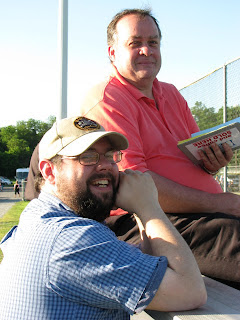 The calender on the computer was jammed full of baseball related events on Wednesday evening so my daughter Rebecca and I set out to catch as much of the action as possible. The number of items was 5 so lets get right to it! 5:00 p.m. -Head Coach Alan Knight and his Page County Panthers hosted Gretna in a Region-B softball semi-final in Shenandoah. 6:00 p.m. - First pitch is set for the Region-B baseball semi-final between host Luray and the visiting Cavilers from Chatham . 6:30 p.m. - Diane Buckley and Bill Turner roll out the red carpet at Imagination Station for the annual meet and greet that is "Meet The Wranglers". 7:00 p.m. - Mr. & Mrs. Bruce Alger and company prepare a huge dinner for the "Meet The Rebels" which is to be followed by an exhibition game versus the RCBL's New Market Shockers. 7:00 p.m. - Dateline Strasburg - Appomattox and Strasburg begin play in the second Region-B semi-final with the winner hosting the Luray - Chatham winner. I
3 comments
Read more

A Day at the Office : Part 1 : Waynesboro's Jim Critzer

May 27, 2008
The last time I watched Jim Critzer flash that famous ear to ear grin of his before today was moments after Waynesboro defeated Luray in game four of the Finals last season. I had the pleasure of interviewing Critzer while he still had his hands on the trophy but that smile paled in comparison to the one I saw this evening. One of the most fascinating things for me about the owners of the 11 teams in the Valley League is that they all have "real jobs". Critzer works for a living like all of the others but the difference for the Waynesboro owner is he gets to wear cool uniforms to work and I can tag a long with him for a day. Critzer is the head baseball coach for the other tenant at Kate Collins Middle School- his Waynesboro Little Giants. Waynesboro captured the regular season crown in the newly formed Southern Valley District which earned them a first round bye on Monday evening. William Byrd High School (Vinton) advanced to face the Little Generals with a 2-1 vict
1 comment
Read more

May 26, 2008
Luray opened what the Bulldogs hope to be a deep run into the playoffs by edging visiting George Mason 3-2 in high school baseball action today in Luray . Ryan Carroll sent a flair just out of the reach of Mustang second baseman Michael Ward to score Jeremy Leake with the deciding run in the bottom of the fifth inning. Leake walked with one out and stole second base (1 of 6 steals for Luray ) to set-up the big moment for Carroll. The single by Carroll was one of just six hits allowed by Mustang starter Michael Straub . Straub went the distance and fanned 12 of the 18 Bulldogs retired during the contest but lost the pitching duel with Bulldog starter Richard Galindez . Luray scored two runs in the bottom of the first inning and appeared to have the #2 seed from the Bull Run on the ropes. Lucas Dickson walked and Johnny VanWyck singled and both Bulldogs came around to score on a double to the right field wall by Leake . Leake advance to third on a single by Billy Foley b
1 comment
Read more

May 26, 2008
Dallas Baptist University picked-up their very first invitation to the NCAA baseball tourney. The Patriots will make the short drive to College Station as the #2 seed. Texas A+M (#1) and Houston (#3) are potential road blocks in the regional round. Illinois -Chicago rounds out the bracket as the four seed. The opening round games will begin on Friday May 30,2008 with Dallas Baptist squaring off with the Houston Cougars. With any luck the Patriots (4 Luray 2008 players) will have an extended run into the tournament! James Madison University (#4 seed) stays close to home but will have to face #1 N.C. State in the opening game of the Raleigh bracket . University of Virginia players will score some frequent flyer miles as the HOOS head west as the #3 seed. UVA opens with #2 seed UCLA and also will deal with #1 seed (#5 overall) Cal-State Fullerton and Rider. Good luck to all the players from the 64 teams! Visit www.ncaa-baseball.com for full brackets!
4 comments
Read more

May 25, 2008
Kevin Kouzmanoff (Winchester) is quickly becoming one of my favorite former Valley players! Once again the Nevada Wolf Pack star has homered with Greg Maddux on the mound. Kouz's blast put Maddux (350 wins & counting) up 4-1 after 4 innings. The first time in a long long time Maddux has some breathing room. UVA spotted Miami a 7-0 lead before rallying late and the Cavs dropped the ACC Championship game 8-4 to the Hurricanes. Consecutive losses take a bit of the shine off back to back upsets over UNC & FSU but it should still give the Hoos a boost heading into the regionals.
1 comment
Read more
More posts