Showing posts from November 1, 2009
Show all 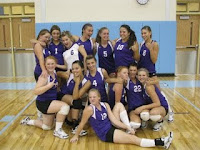 Rams Katlyn Ayers is at it again ! 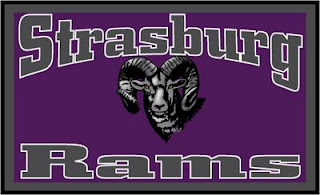 First it was the Bull Run District individual crown and then today Strasburg's super sophomore Katlyn Ayers bested a field of 100 runners to capture the Gold Medal for the Region B Cross Country Championships. _______________________________________ Ayers posted a winning time of 18:50:00 to finish 43 seconds ahead of runner-up Eva Estrada of George Mason. Strasburg finished second as a team behind Mason and the Rams will now advance to the State Meet next week at Great Meadows. Ram freshman Kirsten Campbell earned a medal with her 13TH place finish as did fellow freshman Rachel Taylor (15TH Place). Congrats to Ms. Ayers and the Rams Cross Country team !
Post a Comment
Read more

Thanks to Chris Graham for making Duke @ UVA a memorable game! 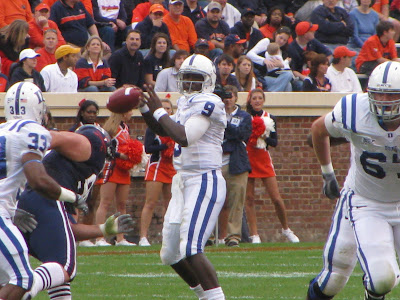 For the first time in eight weeks my Saturday did not start with my Thad Lewis #9 jersey as part of my Duke Game Day experience. Having traveled to the reaches of Lawrence, Kansas and West Point, New York earlier in the season I only had to travel to Charlottesville for Chapter 8 of the Season with the Blue Devils but it was without the jersey. It was fitting that on Halloween Day Chris Graham of the Augusta Free Press and the Waynesboro Generals, made it possible for me to dress up as a sideline photographer for the Atlantic Coast Conference tilt between my beloved Duke and the home standing Cavilers. Armed with a press photo pass and wearing neutral colors I headed first to the playing surface and then later to the post game media room of the victorious Blue Devils. I have experienced a number of "Super Cool" things over the years but I can safely say that getting to "work" the game Saturday makes the cut of things I will always remember, long after the rest
Post a Comment
Read more 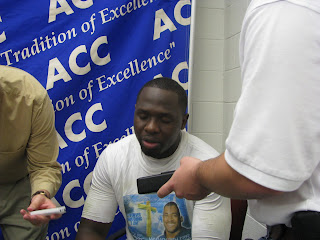 Thad Lewis answering questions in the Media Room Mr. Chris Graham finishing his work for the day. The Duke Media Room. Mr. Cav Man Blue Devils taking a well deserved breather in the fourth quarter. Mr. Cav Man & Rebecca Thad Lewis in the pocket. It's a Mother & Daughter thing. Inside the Press Box @ Scott Stadium Orange & Blue Faithful Thad waiting for the snap. Yes- I am a fan of Thad Lewis. The Cavs Sideline & Fans The Blue Devil letting you know who is #1... How is that for a Belt Buckle? Duke's Cheer Squad working the sidelines. The Coin Toss. The Cav Man & His Horse Taking the Field Here comes the Cavilers. Coolest job in the Country ? Presenting the Colors. "V" marks the spot @ Mid-Field Duke 28, Cavilers 17 (F)
Post a Comment
Read more
More posts