Head over to John's sight & check out his "Coming Out" party

January 24, 2009
Time to go and deal with the Post papers for the next bit but if you are in the market for some Generals news click over to John's sight at www.allthingsvalleyleague.typepad.com . When I get back I have an amazing story to tell about a "Basketball Miracle" that took place earlier today
Post a Comment
Read more

16 straight hours of work then... Nope the answer isn't rest it is Luray @ Stonewall Jackson (Boys) 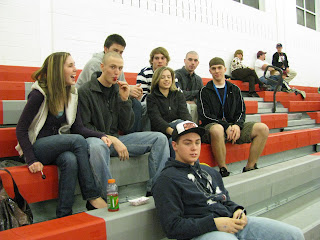 The kids from Central played Thursday so that were looking for some Friday night hoops to watch. Wil Logan against the zone press - Hovatter and Biller Coach Stout and Davey Scott discussing strategy Ms. Jenny Logan trying to hide behind the Falcons Coach Stout leading her team Mr. Ryan Carroll - Assistant B-Ball Coach Luray during a time out Gotta Love it ! SJHS Cheer Squad Our good Buddy John Galle of the SVH The Generals getting fired up before the tip The chest bump ! Stonewall's starting five The Bulldogs getting busy Left to right - Nick Miller, Garret Wilson & Monty Dickson Coach Stout motivating her troops You know what is happening next ? The final score of the Junior Varsity game. Once again I was there helping out Mr. Chuck McGill at the NVD so if you want to read a gamer later you can check it out at www.nvdaily.com
1 comment
Read more

Open for Business : The VBL's Waynesboro Generals - Where do we start? 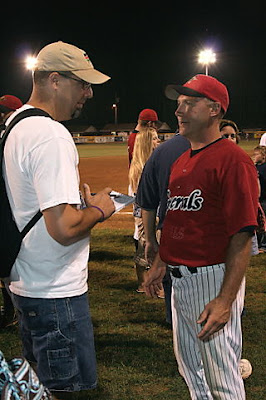 Friday January 23RD, 2009 - The red letter day in the current regime responsible for the Valley Baseball League's Waynesboro Generals. What is the first thing on the list to do? How about starting a to do list! John has already got one started for me to work on but I am running out of paper. ________________________ Thank God that Shirley is in Waynesboro holding down the fort. I wanted to take a minute or two and start the process of listing our line up for upcoming season. Great group of folks that have serious thoughts about making baseball fun at Kate Collins Field in the Summer of 2009. ________________________ Lawrence will be responsible for the team that will lace up the spikes and actually play baseball as well as put together our coaching staff. If it happens inside the fence, it will have the stamp of Coach all over it. Pictures include John Leonard and Lawrence talking after a game last summer and then John himself...
4 comments
Read more

It is in the books : We have ourselves a Baseball Team : Welcome to the Waynesboro Generals 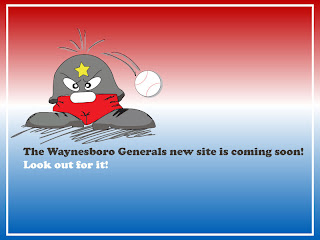 HARRISONBURG- The VBL voted tonight on the new ownership group that is taking over the Waynesboro Generals. Now it is time to move forward with our game plan to try and take the efforts of Jim Critzer to the next level. The vote went 11-0 and now it is time to get busy!
3 comments
Read more 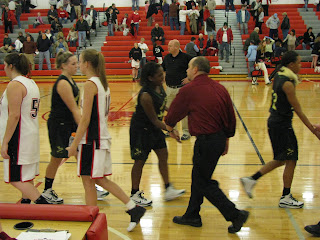 Coach sharing a thought with one of the Green Hornets One of my favorite parts of the night. Win or lose the game, ended the contest on a good note Freshman center Dinah Jones at the free throw line. Jones figures to score a few points over the next 3+ seasons for Wilson Memorial. Brittany Smith, Ashlie Clar and Whitney Wilkins waiting to check in the game. The Generals rally around to hear Burner's instructions Stonewall Coach Burner and Assistant Coach Jason Lutz working the sidelines. Wilson cut it to 7 just before the half but a jumper from Cassie Conley pushed the lead back to 9. All three coaches from Central were in the building to cheer on Roger's daughter Whitney and her team. Good to see that Stephanie, Roger & Mickey all found their way home from Kettle Run last night. Looks like some type of math project Coach leading her Green Hornets Jessica Richardson and freshman Dinah Jones The Stonewall Cheer Squad performing
Post a Comment
Read more

A closer look at Chip Crabill and his Fishburne Caissons 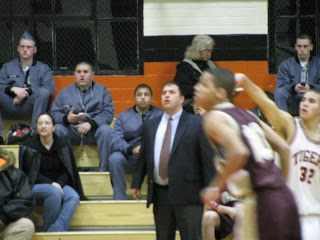 Coach Crabill watching the action Trying to catch the end of a dunk! The photo here says it all -A Father, A Son and a young man looking to be mentored Team huddle during a time out The Coaching Crabill's Young man in the gym snapping up pictures 6'7 Senior Center Calvin Washington Pretty intense looking Tiger Final score of the JV game Chip Crabill - Sharp dressed man... Woodberry Forrest School hosted the contest Action during the JV game- check out the windows & reflections Chip visiting with the host before the game Not as big - still a bit scarey ' Da Bus Chip and his team improved to 5-7 on the season with the victory last night. To learn more about Chip's team head over to www.fishburne.org
Post a Comment
Read more
More posts