````As close as you can come to a Hollywood ending : Golden Bears fall in Kokomo to Cougars 11-10

Tuesday started with the West Virginia Tech bus still making its way to the team Hotel and it would be quite the understatement to say that the quick turnaround for the 11:00 a.m. start had the Golden Bears looking like they were in need of hibernation.

Twenty minutes into the scheduled double header the G-Bears found themselves trailing 9-0 to the Cougars before an out was recorded in the bottom of the second inning. With the team being one loss away from elimination in regards to the River States Conference post season it appeared that the biggest question remaining would not be if Tech would fall victim to a 10-run rule defeat but which inning would be the close out inning. Hope came in that the pitching would settle down in time to stop the bleeding in the second inning and then post four consecutive scoreless frames.

The deficit was still 9-1 when a Golden Bear found his way to home plate in the top of the fifth inning and one frame later Douglas Pollock (Paw-Lick) launched a 3-run home run in the top of the sixth we had ourselves a respectable score in 9-5. The 10 run rule was no longer in play but IU Kokomo still maintained a comfortable lead when the game reached the seventh inning stretch. The Cougars padded their lead by plating two runs in the home half of the seventh inning to push the lead back to six runs at 11-5.

Both teams failed to score in the eighth inning and when the top of the ninth finally was underway the G-Bears were facing a monumental task in needing to plate 6 runs to keep their season alive. There was hope to be felt when the first four Tech hitters reached base and down right excitement when Joshua Ramirez crushed a 2-run home run to left field. The Golden Bears continued to reach base one after the other and before anyone could catch their breathe the score stood at 11-10 with the tying run just 90 feet away at third base and the lead run standing on first base.

With possibly the greatest come from behind victory in the 13 year stint for Lawrence Nesselrodt at Tech  a single base hit away, the Cougars finally settled down and recorded the 27th and final out. Just like Brad Pitt and Chris Pratt in Moneyball, the game proved to be a great story but sadly the final step was never accomplished in the 11-10 defeat.

Closer Logan McClure was warming up in the bullpen in hopes of entering the game in the bottom of the ninth, in hopes of locking down one for the ages. Three hours earlier when the Cougars plated their ninth run before they made their fourth out the idea that McClure could be seen warming up was as far fetched as the team seeing Santa Claus in the dugout but these Golden Bears awoke from their slumber and flirted with a victory against the longest of odds. 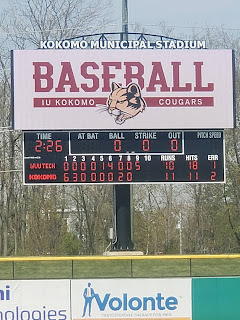