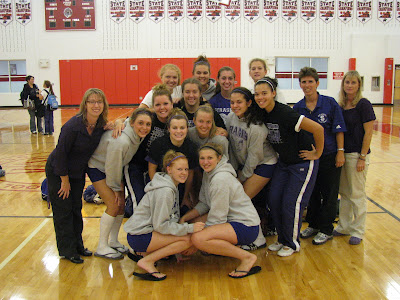 STRASBURG- Senior night at Strasburg last year was without a doubt the evening I would give credit for this site being here today. I had spent the majority of the season covering Coach Suzanne Mathias and her Ram VB team but something changed that night just before the match.

The ceremony for the seven remarkable young ladies was soooo much more important than the fact that the team was going to sweep another opponent on their way to an UN-defeated season in the Bull Run District.

Kaitlin Smoot, Katie Baker, Jo Owens, Cassidy Weitman, Lyndsey Funkhouser, Britanee Hodson and Kayln Warner took the floor with their families. The ceremony was not different from most Senior Night ceremonies, just different for me. The fact that Strasburg would sweep George Mason 3-0 (25-10, 25-12, and 25-8) seemed to be irrelevant to me as a person but I tried to remember that I wasn't there as a person but as a Sports Writer.

As hard as I tried, I couldn't separate out the two and I knew it was time to Follow the Story and Not the game. I gave each of the 7 seniors an opportunity to share how much they meant to each other after the match and we stayed until all 7 had finished their thoughts. I remember walking out of the Gym that night thinking this is an amazing story and someone should write a book about it.

While my Father being in the Military afforded me to travel around the country and then my newspaper (Circulation) experience allowed me to travel everywhere I have ever wanted to go, there was always something missing. Been to all 50 states, lived in 18 of them and added a few choice foreign countries but these 7 young ladies had something more special then any of that. They were from somewhere and had been together K-12!

They shared stories about memories of when they were 5 and 6 years old. I did not know that part of the story until Katie's and Kaitlin's Mothers shared it with me. The fact that the VB team didn't lose a game was never the story, the community and the family environment was the story in my eyes. But that is a story that you can't tuck into a gamer with 500 words or less.

The story did become a book and the memory is one I will hold onto forever. A book about the relationship between a Parent and a Child from the Dad and Daughter that put in on paper to Coach Mathias and her joy for Mrs. Mathais to make the trip down to Richmond for the State Finals. The Baker's and the Smoot's, the large crowds that filled the gym EVERY night the Rams played.

As I mentioned in the beginning of the book - everybody that ever picked up a pen was in search of the Perfect Story- and I had found mine in a tiny community who loved their town and everything about it. The joy of writing about any topic you choose gives you two perks. The first one is you never find yourself writing about something you don't believe in and #2- you might find out that there are really special people out there with a story to share.

This year the Strasburg seniors are Bethany Doman, Rebecca Coffman and Shanna Devers. Tonight will be their night and I hope it is as special for them as it was for the Class of 2008!