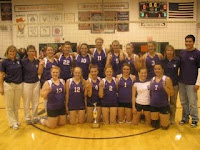 
STATE VOLLEYBALL INFORMATION
Date Posted: Sunday Nov 15, 2009
THE STRASBURG VOLLEYBALL TEAM WILL HOST THE REGION A RUNNER-UP ON TUESDAY, NOVEMBER 17TH @ 7 PM. ADMISSION FOR THE GAME IS $8.00 AS SET BY THE VHSL. NO SHENANDOAH CO. ID BADGES OR PASSES, STRASBURG HS, OR DISTRICT PASSES WILL BE ACCEPTED.
_____________________________________
If Strasburg wins on Tuesday they will play the winner of Gate City vs. Radford at Noon on Friday. The second semi-final will follow.
_____________________________________
John Battle High School is 20-4 on the season but all 4 losses have come at the hands of the Blue Devils.If you would like to learn more about Gate City you can click on the link below for their Region D Finals match. The coverage is from the Bristol newspaper.
http://www2.tricities.com/tri/sports/high_school_prep/article/prep_volleyball_john_battle_falls_in_region_d_title_match/35697/