Remember that time when an Empty Chair cost me a rare chance to visit with Bo Trumbo and Allen Fisher?

While watching the game of baseball has always been somewhat enjoyable to me I will admit to getting to swap stories about the great game of baseball is where true enjoyment come from. Getting to sit with the right person or people for a nine inning contest brings un-chartable joy to any afternoon or evening.

When I arrived at Bowen Field in beautiful Bluefield , Virginia I was looking forward to bumping into Allen Fisher after having shared a couple of days of baseball chatter with on Saturday and Sunday up in Princeton when the great folks up there allowed our Wandering Golden Bears to take camp there for our series with visiting Indiana University - Southeast. 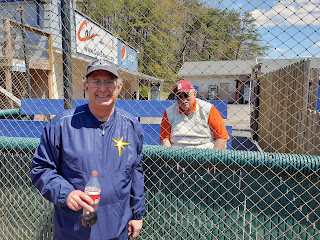 It didn't take long for the stories to start flowing in the press box early on Saturday and they quickly spilled over into the action on Sunday. It's very seldom that I have trouble matching stories about the game with any individual that I cross paths with but Fisher was running laps around me the entire time.

Fisher has spent a lifetime in the game of baseball through his role as Clubhouse Manager first for the Cincinnati Reds and later for the Tampa Bay Rays. The journey began back in the early 1990's when he took the position in Princeton for the Reds minor league affiliate and has now come full circle as he will be back in a Princeton clubhouse again this Summer for the new WhistlePigs.

The best part of the two afternoons with Fisher is that we shared the same thought process when it comes to sharing stories - putting the emphasis on the ones that should make people smile. I am sure that Fisher has seen enough "wrong" to fill multiple books but he didn't go dark with a single story and this, for me is the purest form of story telling! Fisher had mentioned in passing that he would be making the ever so trek across US-460 from Princeton to Bluefield on Tuesday for our contest with the host Bluefield College Rams so I was excited to pick up where we left off over the weekend.

Being that our Tuesday contest was a true road game versus other time this season we called Bowen Field our home, I knew that I would have limited responsibilities for the afternoon so I brought my keyboard along so that I could work on one of the features about Tech's Joe Goddard. A day full of typing about a modern day Hero in Goddard while only taking breaks to listen to Fisher talk about his lifetime in baseball sounded like a dream come true!

Once I arrived at the park, carrying a keyboard and a gas station cup of coffee for Skipper Lawrence Nesselrodt I was quickly introduced to another larger than life baseball figure in Marion F. "Bo" Trumbo. To call Trumbo a legend in both the Valley League and all baseball would be comparable to saying Ben & Jerry's make ice cream. It was amazing to me that in my decade long run in the VBL had never brought me face to face with Trumbo before and I will admit that it brought a HUGE smile to my face when he acknowledged being familiar with some of my work in the VBL.

I was only a brief moment into my conversation with Trumbo when Fisher happened to approach us and surprisingly I had the honor of introducing the pair as they had never met before. My day was getting better at an alarming rate as now I was going to get to sit between the two local legends of the game while creating a story about a third one in Goddard!

Hanging out with Lawrence "Big Picture" Nesselrodt for 13 years was highlighted by who you might get to visit with on a given day and today I had won the lottery. All I had to take care of was one minor detail in that it was my job to go up to the press box and inform the Public Address announcer how to correctly pronounce two of our trickier names in Nesselrodt (Ness-el-wrote) and Jared Sermersheim (Sure-Mer-Sheim).

I bolted up the steps to take care of this and noticed something both surprising and sad. The PA chair was empty which meant there would be no one calling the contest between the Rams and our Golden Bears. Baseball without sound isn't the same as baseball with a voice bringing the players up to the plate and keeping the fans in the loop.

I quickly glance down to the VIP box and could tell Trumbo and Fisher were well into their dialogue and a second glance let me know that there was less than 50 people there to watch a Tuesday afternoon non-conference game. The third and final glance was back at the empty chair and thanks to the sound of Rick Barry in my head, I sat down and called the ballgame. The Rams won 6-1 and my participation in the conversation with Trumbo and Fisher was when I introduced them to the crowd in separate innings.

I am not sure when the opportunity to converse with Trumbo or Fisher will come again or if it will ever present itself again but in a lifetime of trying to do what is right, it's not always easy, is it Rick ?