Every 5TH (or in this case 7TH) Day with Greg Maddux 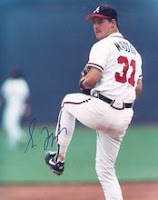 During this stretch Joe Torre and Company dropped to 4 & 1/2 games behind then division leading Arizona. The 8TH loss occurred last Friday night at Arizona but the Dodgers have now won 8 straight games (including five over the D-Backs) to move from the chaser to the leader. Heading into action tonight at San Diego, LA is 1 & 1/2 games ahead of Arizona.

Milwaukee is put the thoughts of a NL West team winning the wild card out of reach so it is now win the West to get in or go home. The Dodgers had one off day this week so it pushed Greg back to day 6TH and then Torre opted to have Maddux wait one more day to open the series at San Diego. Arizona is the only team in the bigs that has pretty much owned Maddux over his career and the move paid off when LA completed the 3-game sweep of the D-Backs.

We are just moments away from the first pitch out at Petco Park with the scheduled start time at 10:05 PM. The same late start is true for Arizona (10:15 PM) as they try to rebound while playing the San Francisco Giants. Maddux will be making his fourth start as a member of the 2008 Dodgers and for the second time it will be against his former mates down in San Diego.

Anonymous said…
Maddux is terrible, and he hates old people, children and puppies.
September 8, 2008 at 11:59 PM