Big Day for Football Around the Old Dominion 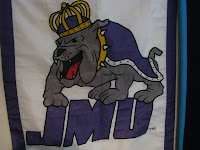 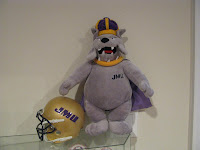 *Virginia Tech looks to advance to a B.C.S Bowl Game with a victory today in the ACC Championship game down in Florida.
Boston College is the team that stands in the way of the Hokies...

*James Madison University hopes to advance to the National Semi-Finals in D-I AA at home against the Villinova Wildcats...
Kick Off is slated for 3:30 P.M. down in Harrisonburg. If the
top-seeded Dukes win they will play at home again next week.

*12 High School teams pursue their dreams of capturing one of six State Championships on the line today...

Where do we begin ?

JMU (11-1) played the Wildcats (10-2) on the road earlier this season and needed a TD pass on the final play of the game to escape Pennsylvania. Last week the stadium was neer capacity despite the students being on break and the game being played opposite of UVA- Virginia Tech. There should be plenty of Purple in the stands for the game today!