An Evening Spent with John Leonard- All Things Valley League 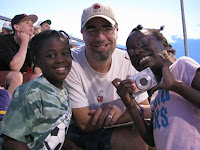 The first time that John Leonard heard me speak about baseball it was at the Grand Stand Managers kick-off dinner. Bruce Alger had invited both Austin Gisriel and myself to speak to the wonderful group. I followed Austin on the stage (Sent Rebecca to Harrisonburg's Barnes & Noble for the July edition of Virginia Living- still not on the shelves yet- their mail subscribers have received the magazine and the early reviews are great) and John heard me discuss a very special topic for me- Heroes.
I live in a different part of the world than most as I am always searching for the GOOD SIDE of any event or the special traits of people living the right way. The trouble with living in the now that way is one is prone to being disappointed but the reward for finding the ACT of kindness or the person conducting business the way you want them too more than makes up for the setbacks.
My list that night was a short one, with GOD taking the top spot and my father- Charles Carter following in second. The list skipped to #3- my baseball hero- Greg Maddux and I ended it with Bruce Alger landing in the 4TH spot. I went on to talk about the promotion (ATV-60) for my 15 minutes but I wondered if anyone in the room made the connection?
My oldest brother Wayne was down in Covington with me and he listened to me talk about Jeff Jefferson a great deal and talk to his Dad for about an hour or so. It was obvious to Wayne that I am a big fan of Jeff so he asked me why hadn't I asked him for his autograph? I tried to explain to my brother that I am not a fan of Jeff Jefferson because he might play for the Twins one day but because of the way he conducts himself on and off the field. He reminds me a great deal of Tyler Kuhn (West Virginia- 2006 VBL MVP) in the way he carries himself at the park.
In a world where it is easy to get hung-up in who won and who lost or who has the best ERA, I simply am in search of a different type of statistic. The term you/I use is old school- Yes Ma am, No Sir, Thank You and Nice Job rank a lot higher in my mind than W-L, On base percentage and career Strike Outs. The other measuring stick is this one- If you are doing a job, one that you are being paid for or that you volunteer for- you simply owe it to yourself and others to do what?- To handle the task with the absolute best of your ability.
It is easy for people to mistake caring to that degree with arrogance but that is a risk one has to take in life. Now- you might ask yourself- how does this relate to spending an evening with John Leonard?
One of the things I discussed with John the other night was how he went to games (with or without pre-determined story ideas) and things he looked for. When I went searching for an angle on how to write about the efforts of this man it left me scratching my head but only for a moment. Neither one of us has ever tried to cash in with our sites in any manner, shape or form and we have both managed to stay away from going negative because we are writing about student athletes. The level of professionalism in John and his efforts to support the VBL can simply be stated by me with this one thought-

Anonymous said…
Another great father-daughter team effort! I am also impressed with John's endeavors. His site, All Things Valley League, is impressive in it's own right with all of the information and analysis that John provides--which is the result of some serious research on his part. But knowing that John is also the father to 2 beautiful young girls (an all consuming venture-to be sure) AND a teacher-which I don't even have space to explain what a time and energy sucking vortex that can be, well, it just blows my mind that he can do all of those things at once and do them all so well. I hazard a guess that Mrs. Leonard is a very special person herself to support (or is it tolerate? ;o}) John's baseball passion so that he can share it with us. Just one word: WOW!
July 12, 2008 at 8:54 AM