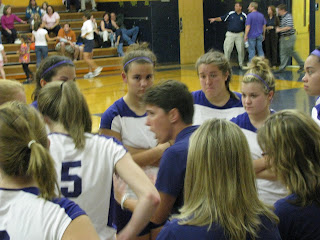 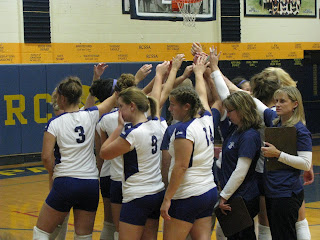 Strasburg (13-2, 5-0 Bull Run ) have now captured 11 straight matches since dropping a 5 set decision to Mussleman (WV) and now have a 2 game lead over the three teams currently tied for second place in the district.

Jaclyn Ayers led the attack in game one with 6 kills as the junior continued her improved play on all three fronts. Ayers has shined as a setter, from the service line and with her kills.

" Jacyln played an awesome game for us tonight, she really carried us in the opener," Mathias added. "She is starting to settle in and play very well."

RCHS jumped on the visitors early in game by scoring 5 straight to start the contest. Strasburg battled back with a very balanced attack. Bethany Doman brought the Rams to within 22-18 with her third kill of the match but Rapp closed out the game with 3 points to even it at 1-1.

Jenna Smoot took charge in Game 3 of the match after Rapp pulled to within 18-15. Smoot collected two of her four kills for the game on back to back plays to push the lead out to 20-15. One of the two kills looked a bit like one of MJ's more famous lay-ups as Smoot leaped for a right handed kill but with the set slightly off mark she switched over and finished the play with her left hand while descending back to the floor.

"Jenna be able to make that type of play comes from her ability to read the floor," Mathias noted. "We are continuing to work on communication on the set and tonight she did a great job of seeing the floor and finding the opening."

After the Rams took a 2-1 lead a familiar chant started to fill the gym. Doman seemed to look over to the stands and give a quick nod to Strasburg's most vocal fan (Mr. Doman) and Dad led the "road" fans in a 5 verse chorus of "We Are Strasburg".

The team responded with a strong start in the 4TH and final game. After starting games 2 & 3 in a hole, Strasburg jumped out to a 7-2 lead and never looked back. Five Rams collected a minimum of seven kills over the four games, led by Smoot (13) and Ayers (11). Sophomore Lauren Agnew (8) and junior Stephanie Conde (7) and Doman (7) joined in with Smoot and Ayers to complete the victory.

"They out played us tonight and we didn't serve as well as we would of liked to, " Panther Head Coach Scott Wilde said. "They are a very good volleyball team and it is tough to have as many service return errors as we had and expect to win the match."


Notes : The Rapp vs. Strasburg Volleyball match is to the Bull Run what the Boston Red Sox vs. NY Yankees is to the American League. Both teams advanced to the Final 4 in the Class A State Tournament last year and both schools have 2 players playing at the next level this season.

From Rapp - Kim Hutchison (6'0 Freshman) is playing for the Mary Washington University Eagles and Elena Kritter is playing in the ODAC down at Lynchburg College (Hornets). The pair are set to face each other at Noon on October 25TH and Wilde plans on being in the gym that day.

From Strasburg - Katie Baker (6'1 Freshman) is playing this season at Bridgewater College. The Lady Eagles fell on the road tonight 3-1 down at Virginia Wesleyan to drop their mark to 13-5 overall and 4-3 in the ODAC.

Kaitlin Smoot will be playing on the Virginia Tech Lady Hokies Club Team this season and they are preparing to host a tournament later this month with over 30 schools from around the country playing. The week-end of October 25 & 26 is the time for the Tourney...