It's in the books: Luray Wranglers Capture 2nd Title in 3 Years 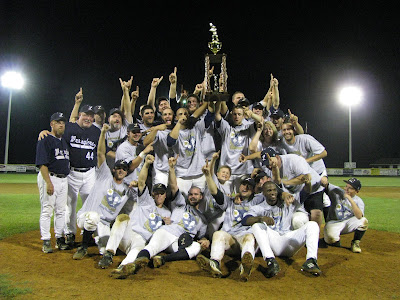 Much, much more to come on this story later! The Wranglers defeated the Covington Lumberjacks 4 to 0 at Bulldog Field!

How 'bout them Wranglers?!

The question all season has been which has been more impressive- Luray hitting or Luray pitching? Alex Wimmers (Ohio State) and two relievers combined to shut out the high octane Lumberjacks for a second time in three nights but that pesky little (Ryan) Schimpf went yard for the third and fourth time in the VBL Championship!

Luray played on the last day of the season for the third straight year and now there are book end Lineweaver Cups in Bill Turners's trophy case!

Anonymous said…
Congratulations to everyone! It was a great summer filled with lots of memories! Thanks again Carter family for being the cause of many of them! It will be May again before we all even blink. Looking forward to 2009--Go Turks! :)
August 6, 2008 at 1:09 PM

Anonymous said…
congratulations wranglers and everyone who is associated with them and also a big congrats to all of the 2008 Wranglers Team.
August 6, 2008 at 9:00 PM

Anonymous said…
cant wait to see the wonderful photography of the game.
August 6, 2008 at 9:00 PM

Anonymous said…
Another stat you have to add is that Bulldog Field has been the place where the past 3 years the final game of the year was played in the Valley League.