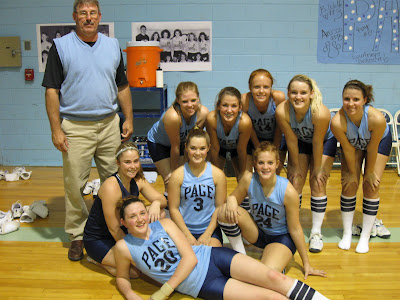 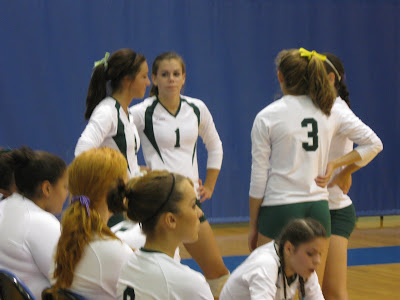 HARRISONBURG- Page County had momentum on their side as the Lady Panthers traveled over to Eastern Mennonite University for its Shenandoah District Semi-Final against #1 seed Wilson Memorial. PCHS captured four straight matches that took Alan Knight and his squad from a tie for sixth place all the way to the match with WMHS.

While Page had momentum on their side, Green Hornets Head Coach Kim Claytor had Kala Guy on her side. The 5'8 senior has the ability that so few athletes at her age have- the ability to take her game to another level when her Coach or team needs her to do so.

Anissa Price and Niki Zwanzig took turns keeping the Lady Panthers in the opener as both seniors scored 3 kills. Price pulled PCHS to within 22-21 with her 3RD kill but Guy pushed the lead back to two at 23-21 and Wilson closed out the win at 25-22.

Game #2 Highlights : Guy started the second game on fire and collected her fourth kill to push the lead out to 7-2. Kori Jenkins brought PCHS back with a pair of Aces during a 6-0 run to trim the lead to 9-8. Wilson helped the run with four errors but rebounded behind the efforts of Noel Bartley.

Bartley mixed in 2 blocks and a kill during a key stretch that pushed the lead back out to 17-10. Bartley did the rest of Game 2 damage from the service line as the junior put the game away with 2 Aces during her 4 service point run. Guy was there at the end with the final two points coming on a block and a kill in the 25-16 victory...

Game #3 Highlights : This one turned out to be one for the Ages ! The game was tied at 5-5 when Guy went to the service line. The run was 12 points from the line which included 3 Aces. PCHS trailed Wilson 2 games to zero and now 17-5 in what would be the clincher.

Travel back in time a couple of weeks to the ALCS when Tampa Bay led Boston 7-0 in the clinching game that would send the Rays to the series. Down 2-0 and 17-5, it was as if Alan Knight and his Lady Panthers had Wilson right where they wanted them.

Brittney Wolfe went to the service line and proceeded to collect 3 Aces of her own during an 11-2 run that brought Page back to within 19-16. Guy tried to right the ship and her block pushed the lead back to 22-17. Jenkins went back to the service line and her two Aces sparked an 8-1 run that pushed Page to an amazing 25-23 come from the grave victory.

20-6 was the rebound score as Page went from down 17-5 to up 25-23 in one of the greatest comebacks I have ever seen. Just like with Boston, Page would still need to capture to more games to make the comeback complete...

Game #4 Highlights : This time it was Page that jumped out to an early lead at 5-2. Taijha Jones scored a kill to give Wilson a 7-6 but there was no way to know that it would be their final lead of the game. Price finshed off the 25-19 victory with a Kill as the Lady Panthers never allowed Wilson to get closer than 4 points the rest of the game...

Tied Up at 2-2 and looking to complete the comeback, a Zwanzig kill off of Guy gave PCHS a 3-2 lead and that is when Wilson Memorial's All-Star took her game to the next level. Guy wasn't alone though as Tiffany Crosby scored 4 early kills, including 3 straight during the 8-0 knock out run. Zwanzig slowed the run with her final kill of the match to make it 13-6 but Bartley closed it out with a kill and a block... Final Score- Wilson 15, Page 6

I was able to spend a few minutes with PCHS Head Coach Alan Knight after the match:

"I am not happy with the way we played in Games 1 and 2," Knight said. "But when it is a #4 seed playing a #1 seed, alot of teams would of quit. Tonight was typical of our season in that we played real well at times. We didn't quit and came from way behind to make a game of it."

Alan did mention at the end of our talk that even when his squads that captured State Championships back in the late 80's and early 90's that he was never satisfied with the results and that he always was looking for ways his team could play better...

I had noticed that during the comeback Kim had called just 1 time out and appeared very calm during the back half of the match... To borrow a line from ESPN's Stuart Scott - She is as cool as the other side of the pillow. It helps when you have Kala Guy wearing a Cape, I mean one of your uniforms...

Congrats to Coach Knight and his Lady Panthers on their season