Wall to Wall Volleyball on a Thursday Night : Southern Valley District, Strasburg, Wilson vs. Luray and much, much more! 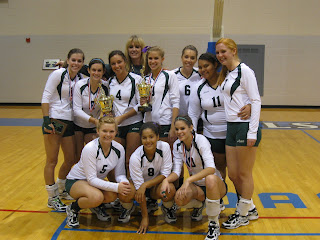 Lets start the Party by checking in at Eastern Mennonite University. EMU was the site for the Shenandoah District finals between #2 seed Luray and #1 Wilson Memorial. Wilson defeated the Lady Bulldogs 3-1 to add the Tournament trophy to the one the Green Hornets collected for the regular season. Luray took the opener 25-14 but WMHS stormed back to take Games 2 & 3 by scores of 25-16 and 25-12.

Luray didn't fold up and go home just yet though as Julie Rothgeb's squad rallied behind Senior Katie Cubbage. Cubbage scored the first two points of the game with Blocks of Kala Guy and Taijha Jones to give Luray a 2-0 lead. Guy (5'8) and Cubbage (5'9) would then spend the middle of the game beating the ball of each other.

A rare Guy miss hit gave Luray a 21-17 lead and the LHS crowd was getting ready for a 5TH and deceiding game. But Luray gave the ball back by committing their 5TH service error of the game and that was the crack in the door that Guy needed. Back to Back Blocks by Guy pulled WMHS to within 21-20 but Luray's Amber Turner made it 24-21 with a"placed kill".

One point away from forcing a deciding game but that point would never make it to the scoreboard. Guy scored four kills sandwiched around an Ace from Jones to allow Wilson to add one more trophy to the overflowing case back in Fishersville...

Shaun Cox was covering the game for the News-Leader (http://www.newsleader.com/) and the News Virginian has solid coverage as well at http://www.newsvirginian.com/

Strasburg will now host the Bull Run District Championship for at least the third time in a row on Saturday night at 7:00 P.M. Head Coach Suzanne Mathias and her squad will return to action on Monday night when Luray heads up to 250 Ram Drive for the Region B opener.

Let's head South to the Sports Desk of Mr.Sisk down at the News Virginian (http://www.newsvirginian.com/ ) and we will find out that both of the Southern Valley District semi-finals are in the books...

Stuarts Draft clinches a spot in Region play as well as a spot in the Championship game with the Lady Cougars 3-0 (25-10, 33-31, 25-14) victory over Rockbridge County. Those two schools will be back at it tomorrow night on the football field in what should be a must-see game.

Fort Defiance needed 5 games to get past the up-start Waynesboro squad in the other semi-final match. Trailing 2-1, Fort rallied to take Games 4 (25-22) and 5 (15-6) and now will face Draft for the Tourney Crown.

While we wait : We can take a look at the Shenandoah District Volleyball Awards