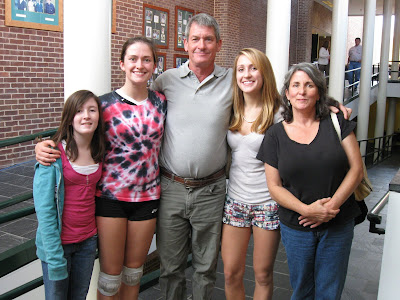 FREDRICKSBURG- Almost half way to Mathews now and decided it was time to try and finish another thought from all of the Volleyball action this past week. A great place to pick up the conversation is the ODAC run that the Lynchburg Lady Hornets put on down at Hollins University.

LC is a very young club and spent most of the season building chemistry. The 48 hours down in Roanoke promises to have the fans of the team already talking about next season. Elena Kritter (Rapp '08) is pictured above with the UN-official 1ST family of VB here at Around the Valley. Three young ladies playing competitive VB and Dad also coaching at two different levels.


The fun started on Friday afternoon when the #7 seed Lady Hornets faced #2 seed Randolph-Macon. After dropping game one, LC roared back to capture the next three and take the match 3-1. A return trip to Roanoke was now in the plans as the Semi-Final match would take place at 11:00 A.M. on Saturday

The tourney run didn't stop there as the next opponent was #3 seed Virginia Wesleyan. Once again the underdog Lady Hornets fell behind but rallied back. Trailing 2-1 in games, LC bounced back and won games 4 & 5 much to the delight of the sign waving crowd that returned to support them.

A great showing for a young team that will return its entire roster for the 2009 VB season. You can check out more info on the squad by heading over to http://www.lynchburg.edu/

Three members of the LC squad made the ODAC All-Tourney team: Elena Kritter,Chelsea Jones and Savannah Tinsley. Congrats to the team for their runner-up finish and to the three young ladies for their accomplishments.

Still have 102 miles left to Mathews so better get back on the road!