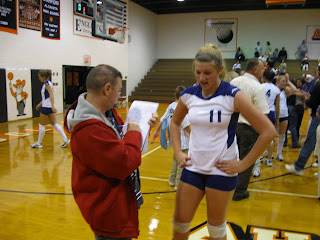 TK chatting with Jenna Smoot - what did she do with her Cape ?

ALTAVISTA - Strasburg rallied late in Game 5 of their match Thursday night against Altavista to punch a return ticket to the Class A State Tournament. The Rams were trailing in the deciding game 13-8 but closed the match out with a 9-2 (17-15) run sparked by junior Jenna Smoot. The next match for Coach Suzanne Mathias and her Rams will be Saturday night in Fishersville against Shenandoah District Champion Wilson Memorial.

WMHS advanced to the Region B finals by defeating Nelson County 3-1 and will remain home to face Strasburg. Jim Sacco and the News Virginian were up in Fishersville and you can check out the results from that match by clicking on http://www.newsvirginian.com/ later this evening. I am sure that Jim will post on his blog (Daily Pooch Punt) about the events as well.

Back to Altavista, where Tommy Keeler of the Northern Virginia Daily was on hand to cover the match for the young Rams squad. There aren't too many people that I have complete faith in when it comes to writing a gamer but TK is the man. You can check his work out at http://www.nvdaily.com/ here in a few hours. With the gamer covered I went in search of other angles to shine a light on an impressive VB match.

Took some pictures of the gym and of the celebrating Strasburg fans after the victory and deceided to follow the day through three sets of eyes. One from each category - Strasburg's principal, TK from the NVD and the young ladies of the VB team. Let's get started by telling you just where Altavista is located - 25 miles south of Lynchburg on US-Highway 29.
____________________
TK : TK covered the 5 setter that Millbrook played at home last night and was figuring to be traveling with the Lady Pioneers tonight over to Loudon County. Plans changed when Millbrook came up on the short end of a 3-2 thriller to Fluvanna County. With Millbrook finished for the season TK is now free to make the loop down to Altavista.
____________________
The day starts around 3:00 P.M. when TK leaves the office of the NVD in downtown Strasburg. The match is slated to begin at 7:00 P.M. and you have to allow a minimum of 3 hours for the drive down. Start out by taking I-81 77 miles South, head across I-64 east until you get to the snake portion of your drive.

A zig here and a zag there until Va-6 dumps you out onto US-29 South. You never thought 4-lane Highway could look so good. TK doesn't stop for lunch/dinner and opts instead to grap a Hot Dog during the pre-game activites.

7:00 P.M. - The line ups are introduced and we are ready to play VB. Strasburg opens with a hard fought Game 1 victory and it looks like the Colonels came to play.

8:35 P.M. - Cell phone rings with the call coming from Fishersville. Mr. Sacco gives us the word that Wilson Memorial just defeated Nelson County 3-1 and I inform him that it is 2-1 Strasburg and 14-13 in game 4.

Altavista captures game 4 and now we are heading to game 5 and the clock is ticking. The Colonels jump out to a commanding 13-8 lead and Strasburg is just two points away from having their amazing season come to an end. Last year I made reference to Katie Baker pulling a Michael Jordan (level of performance) in the Finals last year in Richmond, well if that was true than Jenna Smoot pulled a Katie Baker.

Smoot took charge of the match and didn't rest until the 17-15 final game was in the books.

The fifth and final game of the match ends at 9:06 P.M., two hours and 24 minutes before deadline for Sports Editor Chuck McGill back at the office. TK has to run through 3 interviews before heading out in search of the Internet. Quick visits with Head Coach Suzanne Mathias as well as players Jenna Smoot and Bethany Doman. Time is not on TK's side after the match lasted 2 hours and 06 minutes but there would be no story without some quotes from the key players in the drama.

10:41 P.M - TK hits the send button from the Kinko's located in Downtown Lynchburg and now it is up to Chuck to work his magic. Quick update from Chuck - Western Albemarle defeated Sherando in five games to leave Strasburg as the lone VB team remaining in the NVD coverage area. Double time pressure as Kinko's closes at 11:00 P.M. !

"It's not a bad gig to have, getting to cover back to back five game matches," Keeler said. "If you are covering volleyball, you could not have asked for two more exciting matches."