ATV-60 Celebration down in Waynesboro, Va.

June 30, 2008
Day #31 and the streak of being in a VBL park stays alive but this time it came with icing! Rebecca and I headed down to Waynesboro for the Generals vs. River Bandits make up game. We were there to walk out to the mound with Tabatha Lunsford and Beverly Henderson as these two young ladies threw out the ceremonial 1ST pitch.

These two Generals backers completed their tour of the Valley League last Tuesday night at
Haymarket when they watched their team face off with the Senators. They go into the books at the 4TH & 5TH people to go Around The Valley in 60 Days (25 for them). Skipper Lawrence Nesslerodt and I escorted them out to the mound and we were joined by a pair of Generals behind the plate. Rebecca was there too trying to capture the moment. She also sat down and
handled the interviews with both Tabatha and Beverly and they will appear later as will a "Gamer" from Generals Sign Guy Mike.

Getting to visit with Nesslerodt for a few minutes before the first pitch was a bonus. I had talked with Lawrence in the past while doing a post game interview but never on a personal level. I hope that we will get the opportunity to finish the talk. He did tell me that of all the pics he has seen on the blog his favorite was the one of Bocock sleeping on the bus.

The trip to Kate Colloins meant visiting with Shirley Hundley and Brian Lundstrom. They were both a huge help in coordinating the celebration. A quick hello to Jim Critzer, Chip Krable, Sign Guy Mike, Chuck and Stu Richardson among others. Gary Kahn (#16- Woodstock-picture below)) stopped in the bullpen long enough to sent a Hello to his Mom- Fern. An early Mothers Day gift for next year. Carlos Pertuz is always smiling as is his manager/skipper Donn Foltz. 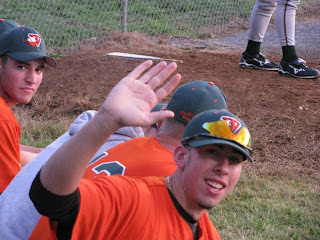 Photos, interviews and a Gamer to come!

EVERY 5TH DAY-- Greg Maddux will end up with another No-Decision but there will be zero
complaining from me on this one. The two places Greg seams to struggle are in Arizona and Colorado. I am sure he will call it his low point of the season for two reasons- 3 Walks and 8 earned runs before coming out. The Padres rallied with 5 runs after he was knocked out to tie the game at 8-8 and that is where they stand in the bottom of the eighth.....
***** The Padres scored 7 Runs in the top of the ninth to win 15-8.... 15 runs in a game that Maddux pitched.... A win is a win, is a win- for the Padres that is...
Greg Maddux Waynesboro Generals Woodstock River Bandits