July 23, 2008
I got the chance to sit down with "GeneralsSignGuy" Michael Kerr and Chuck "The Chuckster" Harris tonight and ask them each a few questions about their journey Around the Valley in 50 Days. 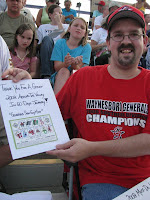 Now that you've seen all the parks, what is it that you think Waynesboro does better than anyone else?
Waynesboro has the best home record in the league. And the best die-hard fans. And it's easy to get a foul ball - and you get to keep it!

What will be your lasting memory of your trip Around the Valley?
It was just the summer of a lifetime.

What is your favorite park outside of Waynesboro in terms of overall experience? What made it so memorable?
I really like Front Royal because of its college atmosphere. It reminds me a lot of Davenport over at UVA (GO 'HOOS).

I also like New Market; the park is beautiful. The fans down there are great, too, like Front Row Fred and Melissa (the Dodges). They made it special.

I really like Staunton, too. It's a nice ballpark and they get the best attendance in the league.

Did this trip change your view of the VBL as a whole?
Before this year I had only ever been to 4 of the parks: Harrisonburg, Staunton, Luray and, of course, Waynesboro. I got to see the other 7 organizations.

What do you think you gained from this experience?
I got to see more games than ever and I got to have the experience of all the parks and fans.

How are you feeling about your first pitch?
I'm excited! I practiced a little bit. I'm also excited because during the 2nd or 3rd inning I get to go up into the press box on the broadcast. (Note: for pictures from his trip into the press box, see Haymarket at Waynesboro in Photos.) 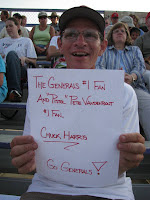 Now that you've seen all the parks, what is it that you think Waynesboro does better than anyone else?
We've got better talent. I love our players. And our fans. My favorite player is Pistol Pete. He's a nice guy. Anything you need he'll try and help you.

The atmosphere is just great here. You always feel welcome.

What will be your lasting memory of your trip Around the Valley?
There's nothing more exciting than seeing Generals baseball.

What is your favorite park outside of Waynesboro in terms of overall experience?
Front Royal. The stadium reminds me of the major leagues, a bit.

Other memories?
Riding to the games with Mike was always exciting. If it was further than Winchester, Mike would drive. Closer and I would drive. Beverly and Tabitha drove us to the Fauquier game, though. That was fun, too.

Did this trip change your view of the VBL as a whole?
It really opened up the Valley. It was a lot of fun. I enjoyed it because of Jerry and [Rebecca]. We saw you a lot of places and that was fun.

What do you think you gained from this experience?
I realized how unique the atmosphere of Generals baseball is. It's so upbeat - I'm lucky!

How are you feeling about your first pitch?
I practiced... I'll hope for a strike!

And pitch a strike he did! Check out these pictures from Mike and Chuck's journey to the pitchers mound. 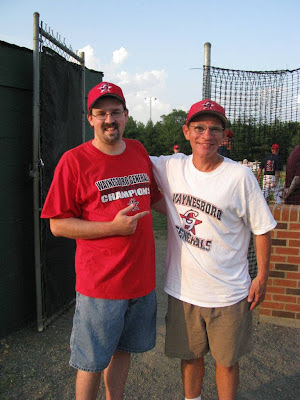 Mike and Chuck just before heading onto the field. They were both a little nervous but they stopped just long enough to pose for a picture. 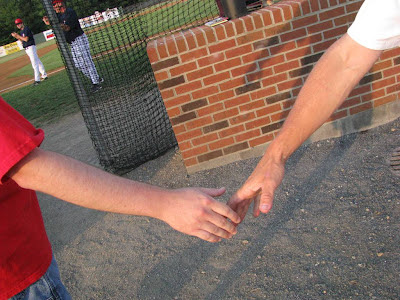 And they always had each others' backs. True friendship! So nice to see. 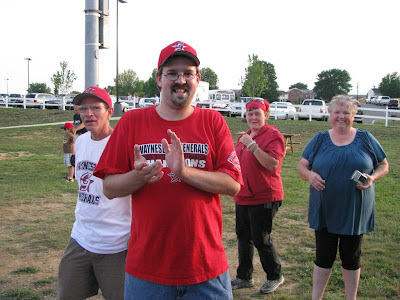 Hey! We spotted some familiar faces close by taking pictures. Fellow General ATV-ers Beverly and Tabitha were close by to take pictures of their Superfan friends. 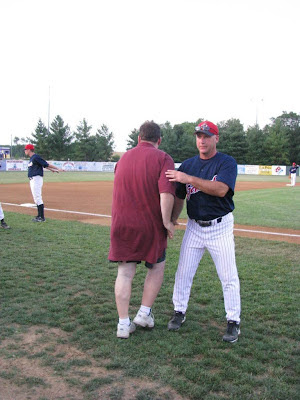 Jerry shaking hands with Coach Nesselrodt on the way out to the mound. Lawrence (Coach) was super supportive and helpful the whole night. "Thank you," Jerry said as he was heading off the field. "No, thank you," Nesselrodt replied. What a class act! 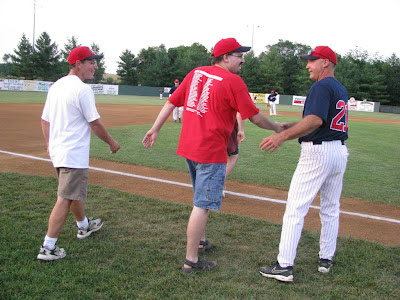 Chuck and Mike walk out with Coach to the plate, shaking hands and congratulations all around. 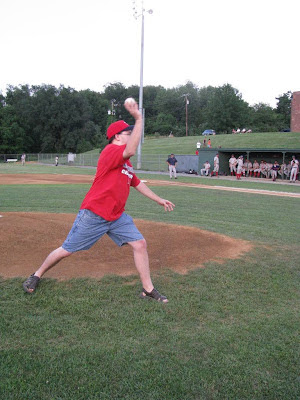 Mike's pitch had the aim of a strike but fell just about a foot short. Still a great first pitch! 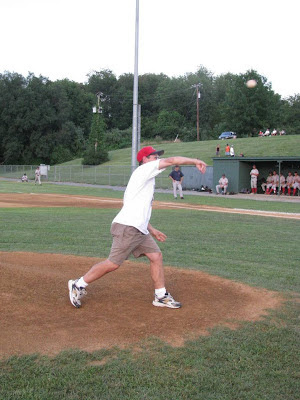 Nervous Chuck threw a strike right down the middle! Way to go! 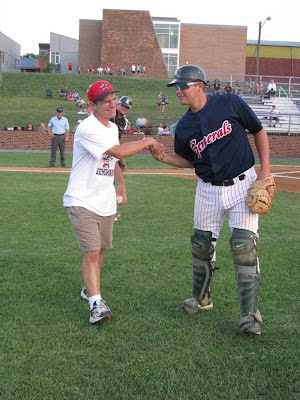 Look at that smile! A mile wide... makes it all worthwhile. 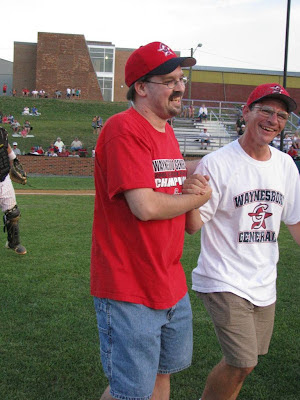 This is my favorite shot of them. I feel like this represents exactly what Around the Valley was trying to accomplish. Two friends finished the loop together, traveling with their team. They came out to the pitchers mound to their entire team's excitement, threw amazing pitches and felt like they were on top of the world for being such dedicated fans. Of the Generals. Of the League. Picture perfect. 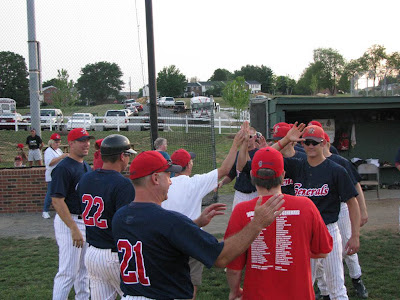 The whole team gave them high fives and back-pats all around! Way to go, guys! 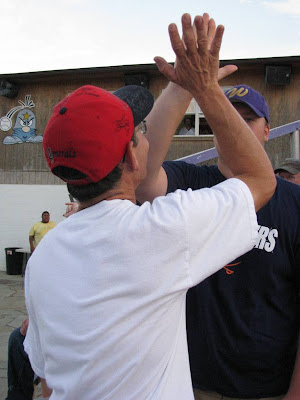 Back in the stands they got some high fives, too. (Notice the Cavalier sabers on Benji's shirt. Go 'Hoos!) 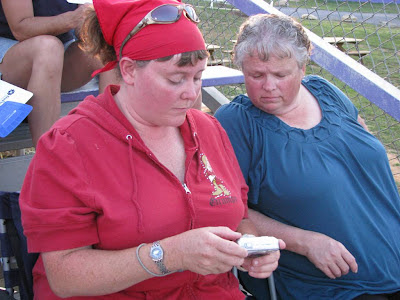 Tabitha and Beverly look through the photos they took of the first pitches. These Waynesboro fans really are one giant family.

Anonymous said…
Great pictures, well I better say Wow they are great and thank you Rebecca for the interview. All of us was excited for the game yesterday and I knew you both was too. Thank you again for great memories!

Anonymous said…
I must add and wish I would have told in the interview is that Chuck Harris has been a big help too on scoring updates for me on games that is on Wednesdays, and Thursdays and some Sundays. He is one true diehard Superfan.

Anonymous said…
Hooray for Mike & the Chuckster! Watching the exhibition game between Waynesboro and the Vienna Senators I was taken with how much fun those Generals fans have when rooting for their team. It is clear that it really helps to get the team pumped up and the chatter was contagious as it spilled into the dugout. The Generals are very fortunate to have such dedicated fans behind them. If my Rebels don't make the playoffs (there's always hope, right? ;o}) then GOOOO GENERALS!!!
July 24, 2008 at 8:00 AM